The Next Few Days in the Doubs

On Monday morning I walked to the further of the two boulangeries in Ornans now that the closer one was closed for vacation. Despite having to cross the river, it still only took 4 minutes to get there. The place was busy, and had lots of choices. I picked up a couple of different croissants and a baguette, which turned out to be every bit as good as those at the first bakery.

After breakfast we decided to take a drive to La Ferme du Rondeau in the village of Lavans-Vuillafans. The farm grows and makes a large array of products, including goat and cow cheeses, and also has a ferme auberge (basically a farm restaurant) and a gite for rent. It’s in a beautiful setting high up in the hills, and we picked up a few goat cheeses before heading down to the valley for a visit to the village of Vuillafans.  On the way to the farm we had spotted this impressive church in the middle of the coutryside. 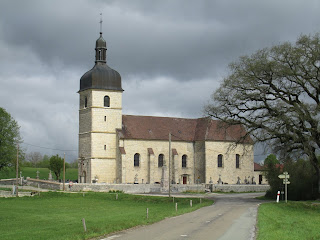 Like Ornans, Vuillafans is on the Loue River. We spent a little time wandering through the village, crossing the river, and visiting the beautiful old church, which dates from the 14th century. 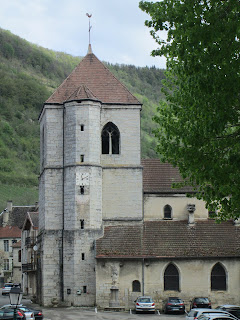 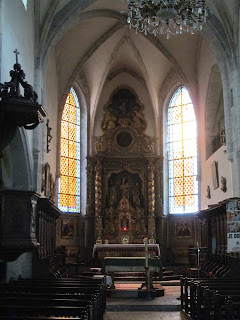 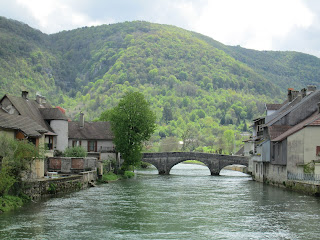 And if you find yourself in Vuillafans and crave cheese, you can get some any time of the day or night at this machine that dispenses Comte and Morbier in several sizes, produced by the fruitiere (cheese cooperative) up in the hills. 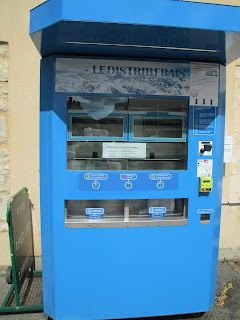 We then returned to Ornans and had lunch at our gite. In the afternoon we decided to stay in Ornans and do some walking.  We had a brochure put together by the tourist office that directs you on a historical walking tour in the vicinity of the Loue River on both banks. The walk was fantastic, with many great views of the river and the town from different angles, as well as numerous historic buildings. It’s easy to see why Gustave Courbet was inspired in his painting by the Loue Valley. 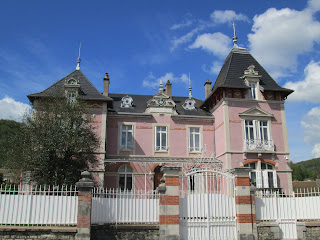 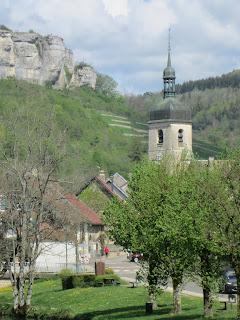 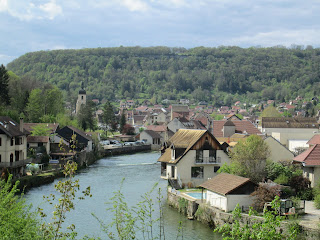 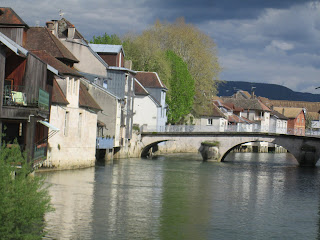 Towards the end of the walk heading back towards our gite we came across these two hard working goats that were employed at clearing the grass on the hillside. They were much quieter than the man on the other side of the road doing clearing with a weed whacker. 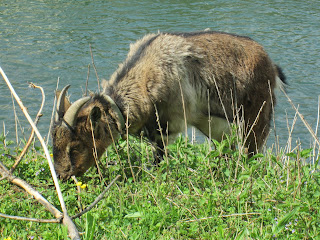 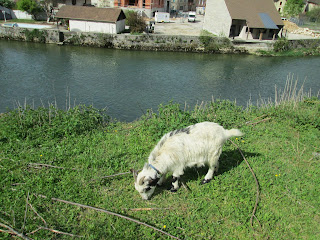 After our walk we stopped at the boulangerie to pick up some pastries for dessert, then headed back to our gite for aperitifs and then dinner. After dinner we took a walk down to the river and the center of town; the daylight lasts quite long now even though it’s only the end of April.

Tuesday morning I again walked to the boulangerie and picked up breakfast items. After breakfast we headed off to visit some sites a little to the west of Ornans, first stopping at the fromagerie in town to pick up some aged Comté and Morbier. We then made a brief stop to view Chateau de Cleron, a private chateau on the Loue River that we had passed by a few years ago when we were in the area. The chateau is only open during the Summer, so we just stopped to get a view and take some pictures. 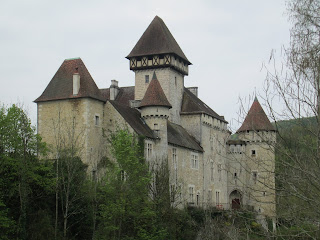 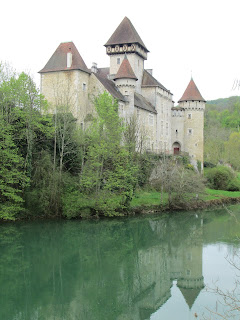 We then stopped in the village of Quingey, which is one of the Cités de Caractere of the Franche Comté region.  It has a lovely old church in the center, Eglise St. Martin, some well-preserved old houses, and was the birthplace of Pope Calixte II, born in the 11th Century and elected Pope in 1119. 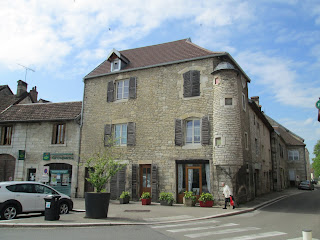 After leaving Quingey we drove to the village of Arc-et-Senans to visit the Salins Royal (Royal Saltworks). Several years ago we had visited the saltworks in Salins-les-Bains, which had been the principal saltworks in the area.  However, it became increasingly costly to buy and transport the wood needed to be burned in order to evaporate salt from the salt water that ran through the region.  To ameliorate the problem, the owners of the saltworks in Salins decided that instead of bringing the wood to Salins, they would build a massive saltworks in Arc-et-Senans, where there was plenty of wood, and bring the water from Salins-les-Bains via piping to produce salt at the Royal Saltworks in Arc-et-Senans.  It worked for a number of years, but eventually problems with the water source in Salins and economic factors caused the closure of both saltworks. However, the buildings still exist in both places, and there are museums which include explanations of the saltworks. 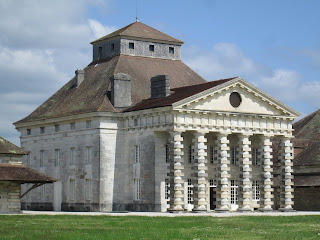 After leaving Arc-et-Senans we drove back to Ornans for a late lunch, followed by another walk up above the town. We saw that the goats were still hard at work clearing their field. 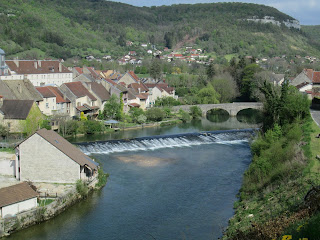