A SHORT EXCURSION TO QUEBEC CITY

No trip to France for us this year, so we decided to take a short trip to the closest thing to France in North America – Quebec City.  So, after  a 5 ½ hour drive through some beautiful northern Maine scenery, we arrived in Quebec City to be greeted by signs in French and the French language being spoken everywhere. 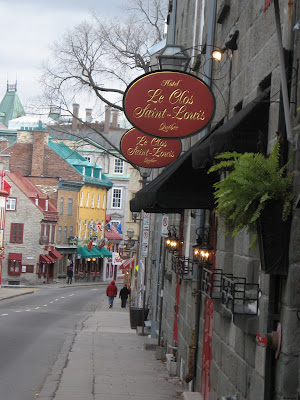 We stayed at a B&B – Aux 3 Balcons  – which was in a great area that was well outside the usual tourist route but was still within walking distance of everything we wanted to see.  For anyone going to Quebec I’d definitely recommend Aux 3 Balcons.  The rooms are wonderful, the ambience is fantastic, the place is on a very quiet street yet is convenient to everything, and the proprietor, Isabelle Ouellet, is a former tour guide who provided us with a wealth of information as well as 2 fantastic breakfasts.

After checking in to our B&B, we spent the afternoon wandering around our neighborhood and then walking towards the walled part of the city.  Quebec City is quite lively, with people walking everywhere and loads of bakeries, restaurants, bookstores and small grocery shops (epiceries). 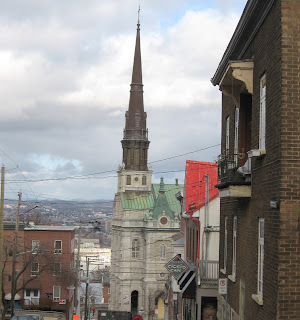 In the late afternoon we stopped into Le Moine Echanson, a wine bar/restaurant that had recently been featured in a NY Times article about Quebec City.  Each season, the restaurant features the wines of a couple of different French regions with food representing those same regions.  This fall, the Auvergne and the Loire are the stars, with a little of Burgundy thrown in.  We wound up having a couple of glasses of wine, then stayed for dinner.  The emphasis is on so-called “natural” wines, generally made by producers following organic or biodynamic principles. Many of the restaurant's wines are Vin de Table or Vin de France rather than AOC wines, being produced by vignerons who prefer to work outside the appellation system, either because they're making wines with old varieties of grapes not approved for their AOC, or because their wines include a higher percentage of certain grape varieties than the AOC rules allow, or, as in the case of Olivier Cousin, because they've decided to thumb their noses at the French wine authorities and refuse to submit their wines for AOC approval.  We tried a number of wines from Olivier Cousin, whose recent troubles with the French wine authorities has been written up in a number of wine blogs recently, and they were all fascinating and tasty, including a red and a rose made from the little-known Grolleau grape variety.  We also had a couple of Loire whites made from the equally obscure Pineau Meunier grape.  One great thing about Le Moine Echanson is that all of their wines are available by either the glass or bottle, and the knowledgeable staff will let you try any wine before pouring you a glass.  All in all, the meal was great, the wines were great, and the restaurant was a fantastic experience. 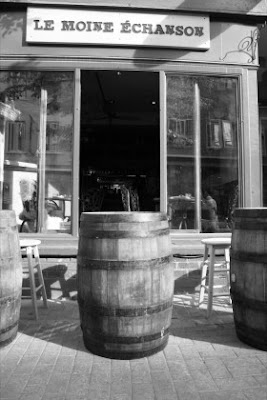 The next day, our only full day in Quebec City, we spent most of the time walking all over the city.  We started in the old walled sector, then walked down to the lower part of the city.  We wandered around admiring the old buildings, then walked along the St. Lawrence river and the port area.


Eventually we wound up at the Marché de Vieux Port, or Market of the Old Port, which is a food hall with farmers and other local producers selling their wares.  There was a great cheese stall selling dozens of different Quebec cheeses, and we would up buying two cow cheeses and one goat cheese. 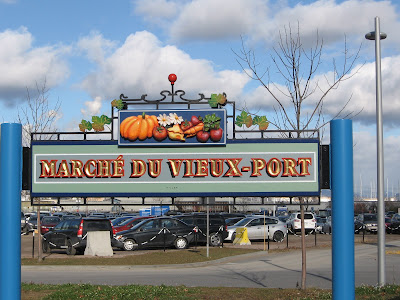 We then walked up from the Old Port to the St. Roch district.  When we were last in Quebec City, about 20 years ago, this was apparently a pretty decrepit part of town, but it's been revitalized, and was definitely worth spending some time walking through. We found a terrific bakery – La Boite à Pain – that supplies the bread for Le Moine Echanson , and we bought a baguette to have with the cheese and foie gras we had bought at the market.  We then headed back to Aux 3 Balcons, which required a strenuous climb up a series of stairways then up another hill.  For lunch we just hung around the B&B, opened a bottle of wine (a really good red Corbieres) that we bought at the local SAQ (Societe Alcohol de Quebec) outlet, and had bread and cheese with the wine.

After lunch we went to the Musee de Beaux Arts to see the Caillebotte exhibit  – Gustave Caillebotte the painter and his brother Martial, the photographer.  We spent an hour or two at the museum, then took a walk through the park in which the museum is located, and eventually made our way back to our B&B in the early evening.  We took another walk in the evening, first having a very forgettable dinner at a forgettable restaurant and then wandering around a bit.  We stopped at a chocolate shop that had a fascinating Musee de Chocolate attached to it, then eventually returned to our room where we had the foie gras from the afternoon with a glass of sweet late harvest Jurancon wine.

On Saturday we checked out of the B&B and drove to the Cote de Beaupré, or Beaupré coast, which runs east from Quebec City along the north side of the St. Lawrence River.  We drove part of La Route de Nouvelle France, and stopped at the park at Montmorency Falls, a massive waterfall where the Montmorency River drops down before emptying into the St. Lawrence.  There's a long walkway heading up towards the falls that give you great views of the massive wall of water, and a walking bridge at the top of the falls.


After seeing the Montmorency falls we crossed the bridge to the Ile d'Orleans, a small island where we were spending the night at Auberge L’Ile Flotante, a B&B on the south side of the island.  Ile d'Orleans is principally an agricultural area, although with its proximity to Quebec City (about a 15 minute drive) it's been developed quite a bit since we were there 20 years ago.  However, it’s still principally a farming area, growing about 80% of the potatoes sold in this part of Quebec, as well as a host of other produce.  There are also a few wineries there, including Cassis Monna & Filles, which produces cassis in various forms from black currants grown on the property.  We were told that the Ile d'Orleans was originally named Ile de Bacchus by the explorers, who noticed all the wild grapes growing there, and in fact there's a winery named Vignoble Ile de Bacchus that makes a fantastic ice wine (Vin de Glace) from Vidal grapes.  We stopped at both Cassis Monna et Filles and Vignoble Ile de Bacchus to taste their offerings, and we came away with a bottle of cassis liquor, a cassis aperitif wine, and a bottle of Vin de Glace. 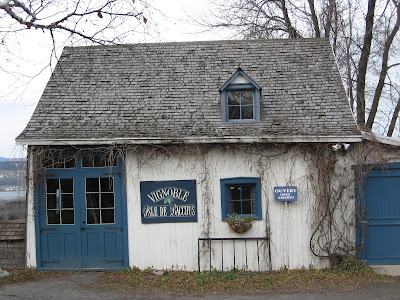 After the two winery visits we drove around the perimeter of the island, stopping at a tower at one end of the island which, once we climbed to the top, gave a great view of the Cote de Beaupré and the mountains beyond it.  We then continued around the island and stopped at the Auberge L’Ile Flottante to check in.  The Auberge is run by Tony, a former banker, and Genevieve, who used to work in customer relations at Sears Canada.  The place is quite wonderful, Tony and Genevieve are incredibly friendly and warm, and the breakfasts they serve are fantastic.

Saturday evening we had reserved dinner at the Auberge au Gout d’Autrefois, a restaurant and farm that raises ducks, geese, guinea fowl and pheasants, as well as organic vegetables.  The farm and restaurant are both run entirely by Jacques Legros – a former Green Party candidate in the Canadian federal elections – and his partner.  The meals served at the restaurant are principally from the products raised at the farm, as well as from a few other producers on the island.  The vegetables are all raised organically, the animals are raised humanely and in the open air and with no antibiotics or growth hormones used, and all work on the farm is done by hand with mechanical instruments.  Our dinner, which consisted of a 12-course set menu, featured fare from all of the various animals raised on the farm, including smoked goose breast, smoked duck, rilletes of goose, duck, and wild turkey, and breasts of pheasant and guinea fowl.  The restaurant doesn’t serve wine, but it supplies wine glasses and corkscrews, and we brought two wines we had purchased in Quebec City – a Rolet Cremant de Jura Brut and a 2009 Bourgueil from Yannick Amirault – plus the Vin de Glace from Ile de Bacchus.  Dinner was an amazing experience, with Jacques explaining the preparation of each course and how he raises the animals, and it stretched out over almost 4 hours.  Needless to say, we slept well that night, our last night before driving home.

On Sunday we left Ile d’Orleans, drove through Quebec City and south across the bridge out of the city, then headed west along the St. Lawrence to try to find a couple of cheese producers.  We spied one that we hadn’t planned to stop at (Fromagerie Bergeron), but since it was open we stopped in and bought some cheese.  However, the next producer, Jac le Chevrier, whose fantastic goat cheese we had bought at the Marche de Vieux Port, wasn’t open, and we never did find La Moutonnière, a sheep cheese producer in Sainte-Helene-de-Chester.  We then decided to head back to Maine for the long drive home, and since it got dark so early we weren’t able to see the scenery for a large part of the drive.  It was a great trip, and we plan to return soon, this time adding a separate expedition to stop at some of the fantastic Quebec cheese producers.
Posted by Bob Rossi at 12:10 PM 3 comments: