In my last blog post from our recent France trip I wrote about our visit to Vignoble Dinocheau, a small family-run winery in the Loire Valley village of Monthou-sur-Cher.  We brought back two wines from our visit to the winery, and already had one of their wines at home, which we had bought here in Maine before our trip.  Last Saturday night we had three friends over for dinner, and made it “Dinocheau Night” by opening up the three Dinocheau wines. 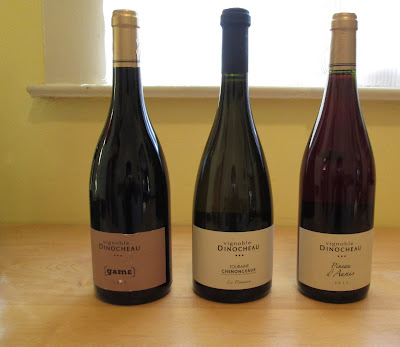 After the Touraine-Chenonceaux I opened a bottle of 2013 Dinocheau Pineau d’Aunis, the only Dinocheau wine that is currently imported into the United States and sold in Maine.  This wine is simply designated as Vin de France, since the Pineau d’Aunis grape is not authorized to be used in AOC Touraine reds, only in Touraine rosé.  Pineau d’Aunis generally makes a very light-colored red wine, barely darker than a rosé, and has a distinctive peppery taste.  This wine was both light-colored and peppery, and everyone thought it was outstanding.  As many wine drinkers have discovered, there is a lot of excellent wine being made outside the appellation system in France and designated as Vin de France (which replaced the old designation Vin de Table).  As an aside, Dinocheau also makes a Pineau d’Aunis rosé, which we tasted at the winery.  It was exceptional, and the 2015 vintage is being imported into the United States and hopefully will be available in Maine very shortly.

Finally, with the main course, a pork roast with garlic and rosemary, I opened the 2011 [gamε], presumably pronounced “Gamay” as in the grape variety.  For some reason this wine is a Vin de France, despite the fact that Gamay is a permitted variety in AOC Touraine.  We were told at the winery that this wine had been oak aged to some extent, so maybe that has something to do with the lack of an AOC designation.  There were only a few cases of this wine left at the winery, and Laurence gave us this bottle as a gift.  Once again, the wine was pronounced as excellent by everyone.

I think it’s fair to say that everyone was impressed with the Dinocheau wines, which wasn’t surprising given how impressed we were with all of their wines when we tasted them at the winery. One wine that we had tasted at the winery, and really liked, was the 2015 Orbois, an IGP Val de Loire made from the obscure Menu Pineau grape variety.  This grape, also known as Arbois (hence "Orbois," so as not to cause any confusion with the Jura Arbois appellation) is an old Loire variety that has fallen out of favor and is rarely seen.  Dinocheau's 2015 was outstanding, but was not yet for sale.  The American importer for Dinocheau told me said he's hoping to taste it soon, and hopefully bring it into the United States.

At the end of our visit to the winery, I had asked Laurence Dinocheau about her training as a winemaker, and she said that she hadn’t formally studied winemaking before working at the winery with her brother and father, but has since taken a few courses.  She said that most of what she learned came from working with her father; presumably that was the case with her brother also, with whom she shares duties running the winery. I didn’t have a chance to ask her about her father’s training. However, whatever the training, the result is some outstanding wines.
Posted by Bob Rossi at 10:40 AM 1 comment: