As on our last trip to France, we started off in Annecy, and stayed at Hotel de Savoie, the same place as we ended our last trip. We also had a room with the same view – the canal, and the old part of the city with the chateau looming above it. 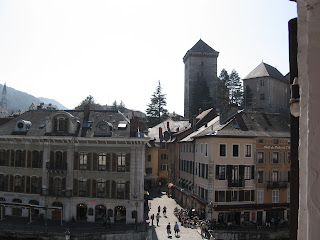 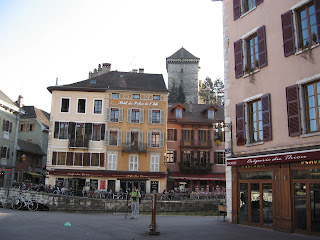 It was a spectacular day with clear blue sky, and we spent most of the afternoon and early evening wandering around the city. There were hundreds of people out walking along Lake Annecy and enjoying the open green spaces all around the lower part of the lake. And flowers were planted everywhere. 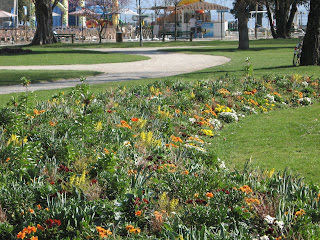 We had dinner the first night at Lilas Rose, the same restaurant we had eaten at every evening on our last trip. While the restaurant had slipped somewhat since last time, the selection of Savoie wines was still excellent, and we had two outstanding wines – a Mondeuse, and a Chignin-Bergeron from Andre et Michel Quenard, one of the top Savoie producers. After dinner we went to check out our favorite ice cream place, Glacier des Alpes, which I had written about last time, but alas it had closed early. Not surprising since it was still March, and mid-week. We then returned to our hotel and went to bed early, since we hadn't slept in about 36 hours. 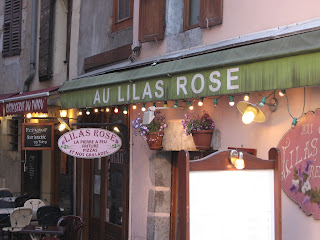 We slept well, and the next morning took a bus to Menthon, a town about 5 miles from Annecy. We walked through the town and into the hills towards the chateau.

We then walked down to the lake and had a picnic with cheese we had brought that morning from Fromagerie Pierre Gay, where we had made many stops on our prior visits. Last year Pierre was named a Meilleur Ouvrier de France (literally Master Worker of France) in the Fromager category, a very prestigious award that comes after a series of competitions. His shop is one of the finest cheese shops anywhere. 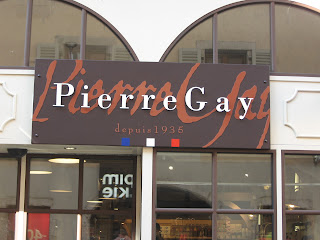 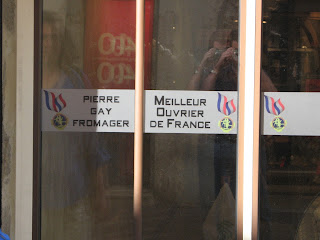 We then walked back from Menthon to Annecy, stopping briefly in the town of Veyrier du Lac, where Mark Veyrat has his 3-star Michelin restaurant. As we were walking, we saw Monsieur Veyrat driving by on his way out of town, maybe to pick up some cheese from Pierre Gay in Annecy.  When we reached Annecy in the mid-afternoon, we stopped at Glacier des Alpes and had some ice cream.  It was as good as we remembered.
Tomorrow we leave Annecy to pick up our car in Geneva, then head to the Beaujolais region for a day on our way to the Southern Ardeche.  More to come ...
Posted by Bob Rossi at 10:34 AM 5 comments: