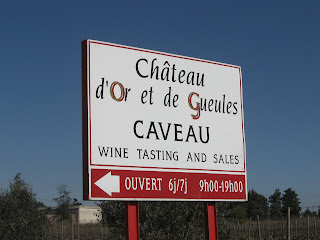 As I mentioned in my April 2 posting, one of the wineries we visited at thestart of our France trip was Chateau d'Or et de Gueules in the Costieres de Nimes region, a visit that was arranged by Carole Decouard, the New England representative for the American importer, Robert Kacher Selections. The Costieres de Nimes, located in the countryside surrounding the city of Nimes, is a somewhat schizophrenic wine region, being politically and administratively in the Rhone Valley, but probably having more in common with the Languedoc than with the Cotes du Rhone when it comes to wine. Whereas the Grenache grape variety plays a major role in the southern Rhone, producers in the Costieres de Nimes rely less heavily on that grape, and made greater use of varieties such as Syrah, Mourvedre, and Carignan.

Chateau d'Or et de Gueules is located just outside the town of St. Gilles, not far from Nimes, and is owned by Diane de Puymorin, who purchased the property in 1998. When she bought it, the estate was known as Domaine de la Petite Cassagne, but de Puymorin renamed the property after her family's crest: d'Or (gold) et de Gueules (red, in ancient French). However, the Domaine de la Petite Cassagne name continues as a separate line of wines produced at the estate. While the estate's Chateau d'Or et de Gueules wines are not presently distributed here in Maine, they are imported into the United States, and the Petite Cassagne wines have been a regular presence in Maine for several years. During our tour and tasting at the domaine, which was conducted by Martin Lasserre, the vineyard manager and assistant winemaker, we tasted the full Petite Cassagne line as well as most of the d'Or et de Gueules bottlings.

The Petite Cassagne line, which is produced principally for the American market, includes a red, a white, and a rosé, and is made from younger vines on the estate, with the wines receiving no oak barrel ageing. In past years, both the red and the rosé have been favorites of mine, but I hadn't previously tasted the Petite Cassagne Blanc. We were poured the 2008 vintage of the white and the rosé, and the 2007 vintage of the red. I found all of the wines to be superb examples of what the relatively-unknown Costieres de Nimes can produce: fresh tasting, bursting with fruit flavor, and having real character. 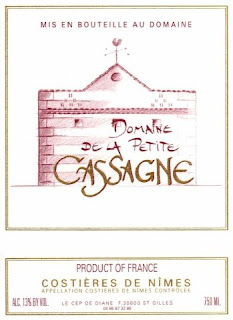 The 2008 Petite Cassagne Rosé, which is made from Grenache, Syrah and Cinsault, has just started to arrive on the shelves in Maine, and it will definitely be one of my top rosé choices for the summer. Expect to pay about $11 for the wine. The Petite Cassagne Rouge is a blend of Syrah, Carignan and Grenache, and is the wine with the largest production. Although we tasted the 2007 vintage at the winery, the current vintage available in Maine is the 2006, and it retails for about $14. I tried the 2006 at a tasting in Portland a couple of months ago, and purchased several bottles. It is a rich, dark wine with intriguing flavors of herbs and black fruit. And while the Petite Cassagne Blanc is not presently carried in Maine, it may be available soon, at least through special order. It is a tasty blend of Grenache Blanc, Roussanne and Vermentino, and has fascinating aromas and flavors.

In contrast to the Domaine de la Petite Cassagne wines, the line of wines produced under the Chateau d'Or et de Gueules label make extensive use of oak ageing. As I mentioned above, these wines are not presently distributed in Maine, but they are imported into the US and are worth checking out if you have the opportunity. The red d'Or et de Gueules wines that we particularly liked included the 2006 Les Cimels, a blend of Syrah (40%), Grenache (30%), and Carignan (30%); the 2008 Qu'es a Quo (from the Occitan, or langue d'oc, translated as "what is it"), a wine made entirely from Carignan grapes from 60-year-old vines; and the 2007 La Bolida, a limited-production wine made principally from Mourvedre grapes, with a little bit of Syrah and Grenache added in, and aged for 14 months in oak. All of these wines were superb, and although drinkable now, they could definitely handle several years of cellaring.
Posted by Bob Rossi at 11:29 AM No comments: