We began our trip to France exactly the same way we began last year’s visit. We flew on Lufthansa from Boston to Lyon with a change in Munich, picked up a car at the Lyon airport, and made the short drive from the airport to Cremieu. Cremieu is a small town that we fell in love with the first time we stayed there a few years ago, and this was our third visit.  We parked near the center of town, and spent the afternoon walking through the town, going up to the medieval chateau, walking around the old walls, and passing by the former convent buildings. The brewery Les Ursulines, named after the nearby former Ursulines convent, opened at 4 p.m., and, following our tradition, we stopped to have a beer in their courtyard. 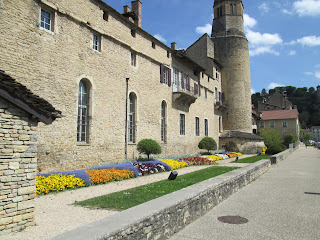 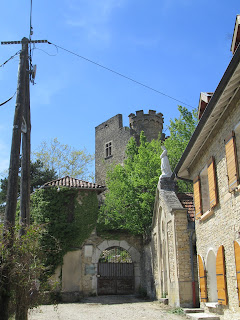 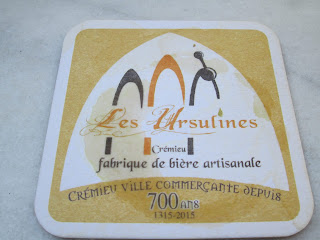 We had booked our hotel for the first night back in the Fall, and wanted to stay at Auberge de la Chaite, where we had stayed on our two previous trips. When I made my reservation, I discovered that the hotel had been sold by the family that had run it for over 30 years. It was a charming place with just 9 rooms, and a great restaurant serving classic French country cooking, with the chef being one of the owners. It was now called Hotel Le Baron, and was being run by a young man and his partner. Based on what I could see from the web site, the decor had been changed somewhat, and the menu was totally different. However, we decided to give it a chance. The rooms were still quite nice, albeit furnished differently, and the decor of the common areas and the restaurant was very different.  As for the restaurant, the meal was enjoyable, but in our opinion it didn’t compare to the meals we had had at Auberge de la Chaite.

Friday morning, before leaving Cremieu we stopped at Les Saveurs Paysans, a small food shop that carries products from local producers.  We bought several goat cheeses from a nearby farm, strawberries that had just come into season, walnut oil from a local mill, and some sparkling wine from a Bugey producer.  We then headed out to visit some wine producers in the Maconnais on our way to visit our friend Ghislaine in Burgundy.

The Maconnais wine region is a little south of the famous wine appellations of Burgundy in the Cote d’Or. The wines from Maconnais are almost all white, and, like the white wines from the rest of Burgundy, are almost all 100% Chardonnay. And speaking of Chardonnay, in the middle of the day we stopped in the village of Chardonnay, which proudly proclaims that it gave its name to the Chardonnay grape.  Also, the village of Chardonnay, like many villages we drove through, can append its name to Macon as an appellation. Among the appellations whose wines we tried on this excursion through the Maconnais, or whose vineyards we passed through, were Macon-La Roche Vineuse, Macon-Uchizy, Macon-Bellait, and Macon-Ige. We visited 3 wineries, 2 of which we had stopped at previously – Chateau de la Greffiere in La Roche Vineuse; Domaine Talmard/Mallory et Benjamin in Uchizy; and Domaine Corsin in Davaye, principally a producer of Pouilly-Fuisse. The Maconnais produces excellent wines that are an affordable alternative to the more prestigious appellations of the Cote d’Or. 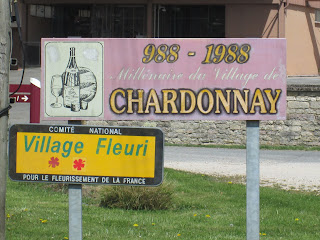 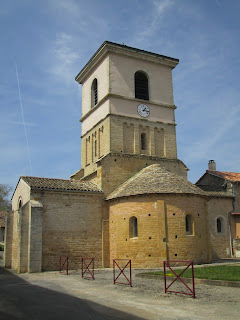 After leaving Domaine Talmard we headed towards Gueugnon, where Ghislaine lives. We had stayed there several times, and were familiar with the route.  We arrived there mid-afternoon, and after spending a little time with Ghislaine, Ann and I took a walk into the center of Gueugnon while Ghislaine started dinner. She had a dance class that night, so we had an early dinner before she left.

The next day Ghislaine drove us to several sights in southern Burgundy. We made a brief stop at a medieval chateau in the village of Chassy. Besides the medieval part of the chateau, there was a tower that was clearly modern, but fit in well with the rest of the chateau; it appeared to be a vacation rental property through Gites de France. After Chassy, Ghislaine drove us towards the village of Uchon, where we took a walk through the hills and admired the views, as well as the numerous huge rocks, known as Les Rochers du Carnaval, that proliferated there. Afterwards we stopped at an auberge in Uchon and had lunch outside.  After lunch we went to Mont Dardon, a viewing area high above the valley with outstanding views in all directions, and took a walk around the park. Afterwards Ghisliane drove to a goat cheese producer she had visited once before, but Friday was their closing day.

We then returned to Guegnon, and Ann and I took a walk to the center of town to pick up some provisions for the evening.  Ghislaine’s 3 children, their spouses, and their 4 children were coming to dinner that night, and Ghislaine was making Raclette, along with accompaniments such as potatoes and charcuterie.  Ann and I were supplying the wine, as well as dessert. We had hoped to get a gateau (a cake), but all of the bakeries had sold out, so we got a few dozen macarons. It was a very enjoyable evening, and everyone liked the raclette and the macarons. When they weren’t eating, the children spent most of their time running around the house playing games with each other.

The next day was a whirlwind tour of goat cheese producers, small villages, and visits to Ghislaine’s parents and several long-time friends of hers. Our first task was to find a particular goat cheese producer, but on the route we spotted a sign for La Ferme de Bellevue, a farm that had goat cheese and chickens. We stopped there, and while they were out of chickens and eggs, they had plenty of goat cheese. So we stocked up there, and then headed for the other farm, La Ferme des Biens Vivants. It was a beautiful place, and after buying several goat cheeses, we went to the barn to see the goats. There was a young woman there feeding the goats, and she talked to us a little about their operation, which had over 150 goats.

After leaving the second farm we headed towards Ghislaine’s parents’ house, first making a few brief stops along the way, including this beautiful church in the countryside. 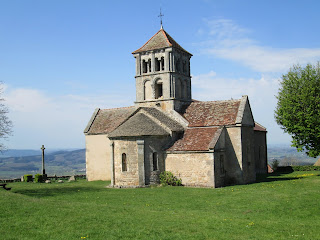 When we arrived at Ghislaine’s parents, her mother had made lunch for us. It was an enormous meal, and included cauliflower gratin and a roast pheasant that a friend of theirs had hunted. It was a real treat, as pheasant is not something you often find in the U.S.

After lunch we drove through the countryside and made a couple of stops, the first of which was Le Moulin d’Angoin, an old restored water mill that appeared to be a residence. The next stop was the town of Saint-Gengoux-le-National, a medieval town with some beautiful old buildings, and a couple of non-Medieval cats. 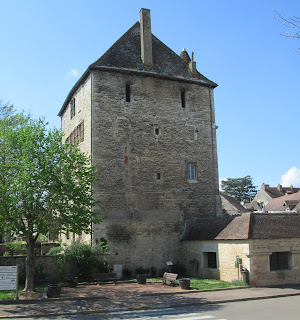 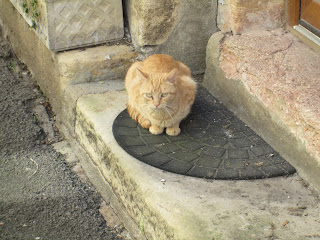 We then finished the day by visiting two couples who are longtime friends of Ghislaine, all of whom we had met previously. We shared a bottle of wine from the Maconnais, a Vire-Clesse, that the friend at whose house we all met brought up from his cave.  When we left he gave us a bottle of sweet Coteaux de Layon that he had picked up in the Loire, and we had that after dinner at Ghislaine’s house.  This was our last night in Gueugnon; the next day we were heading a little bit north in Burgundy to the village of Chateauneuf-en-Auxois.
Posted by Bob Rossi at 10:53 AM