On Saturday morning we left Sierre for the drive to Ornans in the Doubs region in France, where we were spending our last week. Before leaving we gave Christine and her husband a bottle of wine from one of the wineries she took us to the day before, and also a bottle of St. Veran from the Maconnais producer Domaine de Corsin that we stopped at at the beginning of our trip.  And in return, Carlo gave us a bottle of his red wine. He normally doesn’t put a label on his wines, but he does have a bunch of generic labels that he uses when necessary.

On the drive to Ornans we stopped at Chateau Chillon on the shore of Lac Leman (Lake Geneva), and took a tour of the chateau, which dates from the 1500's.  The chateau owns some vineyards, which apparently had been cultivated for many years and are now taken care of and have wine made from their grapes by a local producer. The wines are only sold at the chateau, and the proceeds go towards a major renovation project at the chateau. I decided to buy a bottle of their white, which is made from the Chasselas grape. 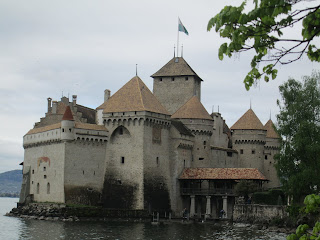 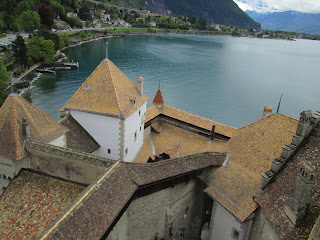 After leaving Chateau Chillon we headed towards France, and while there was a long line of cars at Customs going into Switzerland, the crossing into France was a breeze.  As we had advised the gite owner, we arrived right around 4 p.m., and she was waiting for us.  She showed us around the gite, which is really fantastic.  We then took a walk into the center of town and stopped at the boulangerie, a small grocery store (an epicerie), and a butcher shop (boucherie) to pick up provisions for the next couple of days. We had stopped at this boucherie 2 years ago when we were staying in the Jura, and was impressed with what they had, and were happy to go back there.  We then went back to the gite where we first had some aperitifs, and then had dinner of white truffle tortolini and asparagus that we had bought at the market in Sion in Switzerland.

The next morning I walked to the boulangerie to pick up croissants for breakfast. It was all of a 3 minute walk, maybe 4 minutes coming back uphill. The croissants were outstanding, as were the pastries we had bought there the night before [Addendum: we stopped there on the way out of town and picked up some pastries before they closed; we had them after dinner, and they were fantastic]. Unfortunately, they had a sign posted prominently in their window informing their customers that starting the next day, they would be closed for vacation for 2 weeks. So tomorrow morning I’ll have to walk to the further bakery, which is probably twice as far.

After breakfast we took a short drive to the large grocery store outside of town to pick up some things we hadn’t been able to get the day before in town.  Afterwards we returned to the gite and walked to the Gustave Courbet Museum in town. Courbet was born nearby in 1819, and lived in Ornans as a child. When he was 20, he went to Paris to live with a relative who was a law professor, and Gustave’s father hoped he’d become a lawyer. However, he wasn’t interested, and decided to study painting instead. He eventually became one of the most famous painters of his time, and helped put Ornans on the map. What was once the Courbet family home in Ornans is now the Gustave Courbet Museum, and this year, in honor of the 200th anniversary of Courbet’s birth, there are numerous special events and exhibits at the museum. We arrived during the last 2 days of the exhibition of Courbet’s sketches, so we got to see that exhibit, as well as some of the permanent collection that we had seen 2 years before.

In the afternoon we drove through a downpour to Chateau de Belvoir, about an hour north of Ornans. Except for the summer, the chateau is only open on Sundays and holidays, so we decided to go there on Sunday.  It was an impressive place inside and out, and there were amazing views from the chateau to the valley below, as well as from the road below to the chateau.  The first chateau was built here in the 12th century, and after it was destroyed it was rebuilt in the 15th century. At the end of our visit I asked the woman who had sold us our tickets and guided us on part of our visit if she lived in the chateau, and she said yes, and she gave me the same answer when I asked if she owned the chateau. There had been a horrible fire in 1968 that destroyed a large part of the interior of the chateau, and she said her parents had done the reconstruction of the chateau.  Later research indicated that there were some famous artists in her family, including one who was good friends with Gustave Courbet in the 1800's. That would probably account for the presence of several Courbet paintings we saw in the chateau. 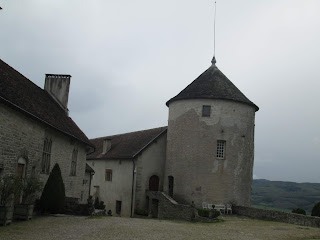 After we left the chateau we drove back to Ornans in a circuitous route to see some towns and villages we hadn’t been to. It rained a good part of the way on the drive, but had pretty much stopped when we got back to the gite. With dinner we had one of the Cornalin wines we bought in Switzerland. Switzerland has a number of indigenous wine grapes, and Cornalin may be the best of the reds.
Posted by Bob Rossi at 3:32 AM